VISIT THE SWAA MEMBERS' MONTHLY SALE PAGE Click here
FEATURE ARTIST - REFLECTIONS OF NATURE 2021
Sarah Lightfoot Wagner - Click here
February's SWAA Feature Artist: Carver Bob Gander
Bob was introduced to diamond willow carving while in Boy Scouts, and his first project was a diamond willow hiking staff. Shortly after returning to the Prairies in 1984, he found some excellent diamond willow along the banks of the South Saskatchewan River here in Saskatoon. This re-ignited his interest in carving, once again concentrating on functional objects such as walking sticks, cribbage boards, lamps, letter openers and many others. 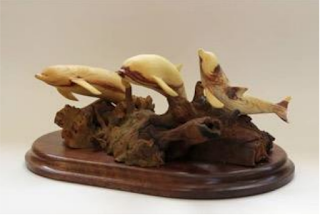 With encouragement from a friend, he joined the Saskatchewan Woodworkers Guild the mid-1990s. This broadened his appreciation for woodworking more generally, and it opened up the opportunity to learn from other carvers, particularly Ron Davidson. Many of these short carving courses involved caricatures and animal subjects.
Bob has also been influenced by the work of well-known sculptors such as Henry Moore and Barbara Hepworth; Jamie Russell, a well-known local furniture maker; and by Inuit sculpture and Plains native art styles, particularly the more stylized representation of subject material. 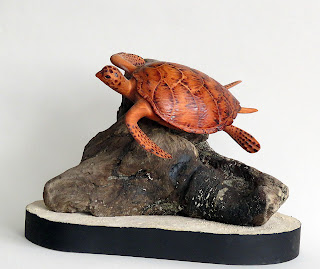 Diamond willow lends itself to carving highly stylized forms, although it restricts them to long thin shapes usually. More recently, he joined SWAA and was exposed to sculpture using stone as the medium. 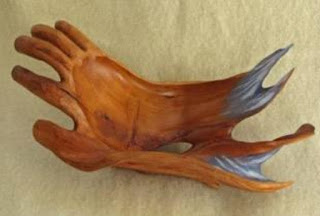 This also introduced him to carving abstract forms. His style with human figures and animals has evolved to being representational rather than detailed realism. He also enjoys geometric forms in part because of the challenge to visualize them and in part because of the strong lines and flowing movement that is inherent to them.
He has won several ribbons at Reflections of Nature shows here in Saskatoon as well as at the Brant Festival in Parksville, B.C. and at the International Wood Carving Congress in Ohio.
SWAA FEATURE ARTIST ARCHIVES
- Angela Buekert
- Connie Lasko
- Martie Giesbrecht
- Beth Campbell
- Colin Chatfield
- John Vancleemput
- Harvey Rebalkin